3 1/2 Year Old Egyptian Girl : Jews Are Apes And Pigs, The Quran Says So

A sickening example of the brainwashing in the Arab/Islamic world and the hatred present in the Quran. I still can't understand why our "educated" leaders claim the Quran to be a book of peace and tolerance. Even this 3 1/2 year old girl knows better. (click either picture to see the video) 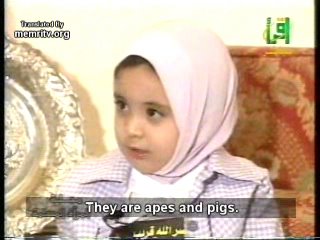 Of course, it's "oppression" that leads to the hatred of Jews in the Muslim world 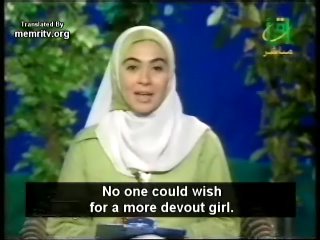 Extracts from the video :

Amer: How old are you, Basmallah?

Basmallah: Three and a half.

Amer: Are you a Muslim?

Amer: Basmallah, do you know the Jews?

Amer: Because they are what?

Basmallah: They are apes and pigs.

Ok, now for the harsh truth, then the clip.
Our leaders are lying to us. They are appeasing an enemy that feeds on appeasement and by the time most realise this, they will either be too far in denial (cognitive dissonance and all), or it will already be too late to do anything about the situation we will find us in. We are slowly being drawn into a situation where all peoples in the west (starting with Europe) will be under the control of extremist Islamic forces and we will only have ourselves to blame. Why is this so bad, some of the more naive amongst you may be asking. Isn't Islam a religion of peace, like so many politicians and celebrities claim?

In short, no, Islam is not a religion of peace, and sure as hell doesn't mean peace. Allah is not the G-d of the Jews and Christians, in fact, Allah was the Moon idol of the Arabian pagans. Jesus in the Quran is not Jesus from the new testament, even though a lot of Muslims will champion Jesus as being a Muslim prophet, usually to garner support from Christians who know very little about Islam, the Quran teaches of a different man. The Quran states that Jesus will return as a Muslim, make pilgrimage to Mecca, declare Jihad (Islamic "holy" war) against the non-believers and destroy the Churches and Crosses.

Now, if I still have your attention, then please listen to this audio clip on the deceptions of Islam (click here). The video is only 28 minutes, listen and learn. You won't regret it and it may even save western civilisation from destruction (well, it's a start anyway).

Comments:
---------------
If a person believes the Bible (which I do), then one has to wonder what kind of religion teaches people to hate God's Chosen People.

---------------
Yeh but you need to look at this in context. The interviewer is merely reacting to US hegemony. Who can blame her? Bush is clearly at fault.

---------------
everything you say is true, good writing. I am a bible believer who thinks the muslims will get the jesus they beleive in ....only thing is we christians call THIS false jesus antichrist.

---------------
Clearly the little girl is merely saying what she has heard around her. There are real reasons for some Arabs to be hostile to Israel, but it obviously doesn't excuse this kind of dehumanising offence. The weakness in western civilisation is that we have abandoned true belief and believe in only multicultural, subjectivist, anti-authority political correctness. In this atmosphere, it is only possible to criticise this girl's family because the is attacking Jews- another minority-victim group and thus allowed in the PC world. Our real weakness is that when they criticise British, American, European culture, we lay down, appease, mitigate, aplliate, accommodate- anytrhing other than stand up for our own right to values, beliefs, an identity and a culture. Until we fill this values and identity vacuum, Al Qaeda and friends will continue to fill it for us and we will be in retreat until we are enslaved. Then, there will be nowhere to run for asylum and no human rights act to appeal to and no special grants to celebrate our culture. Britons shall be slaves.

---------------
where is this video? I challenge anybody to post a link to this video.. but nobody will post a link, have you wondered why? because its nothing but lies and a shameless smear campaign.

The Unreported Jihad Against The Serbs

"Miracles" Of Allah (The Frickin Merciful)

Disclaimer : Do not use this blog to call for genocide, to troll, or to post warez/porn. If you are found to be abusing these rules (which can be updated at any time), your posts will be removed from this site without warning. note - I cannot be held responsible for anything written on this page that you disagree with. If you don't like it, go somewhere else.